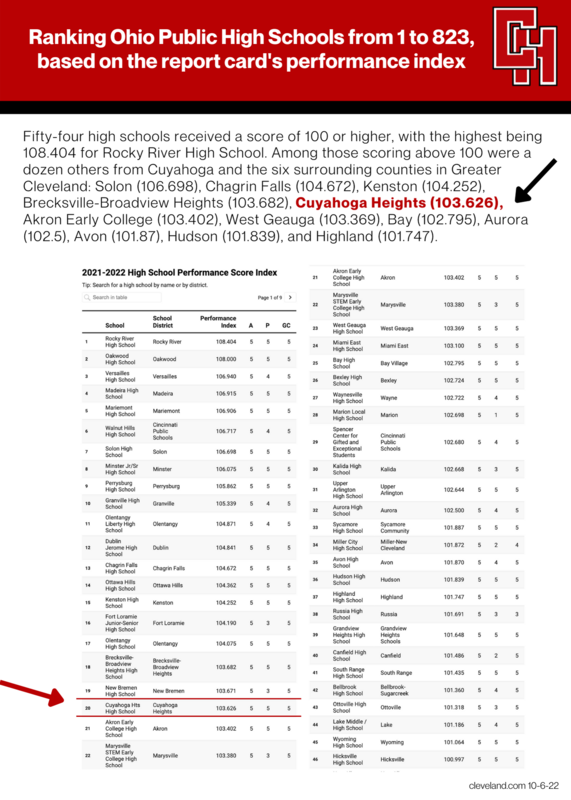 The release of the Ohio Department of Education 2021-22 School Report Cards was good news for the Cuyahoga Heights Schools (CHS). CHS received a total of 22 out of 25 possible stars ranking it among the top five percent of school districts in the state.

“We are very proud of our students, staff, and families for the hard work and resilience they demonstrated through the pandemic,” said Superintendent Tom Evans. “Although this is only one of many ways we use to measure student achievement and success, it demonstrates our commitment to providing our students the best possible education and to preparing them for life after graduation.”

About The Ohio School Report Card

The Report Card includes performance information provided by schools and districts in the form of academic, financial, and opportunity-to-learn data for the 2021-2022 school year. Some of this data is then combined into six components that receive up to five possible stars to indicate the level of performance for the school and district.  The six components and how CHS fared in each are listed below.

Progress - This component looks closely at the growth all students are making based on their past performances. CHS received five (✮✯✭✮✮) stars and significantly exceeds state standards in academic growth expectation.

Gap Closing - This component is a measure of the reduction in educational gaps for student subgroups. CHS received five (✮✯✭✮✮) stars and significantly exceeds state standards in closing educational gaps.

Early Literacy - This component is a measure of how successful schools are at improving reading for at-risk students in grades K-3. CHS received three (✮✯✭) stars indicating the district meets state standards in early literacy (K-3).

College, Career, Workforce and Military Readiness - This component looks at how well prepared Ohio’s students are for future opportunities, whether training in a technical field or preparing for work or college. This component will not be rated until 2024-25.

In the Cuyahoga Heights School District, the Performance Index increased at all three schools and for the district as a whole.  These improvements are shown below:

Overall, the district’s Performance Index was 100.9, placing it among only 7 percent of districts statewide to achieve a score of more than 100; and ranking CHS 56th in the entire state (out of 607 school districts) on the Report Card (according to the Plain Dealer newspaper).